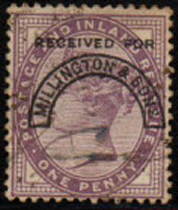 Millington & Sons was a stationery manufacturer in London from 1824 until 1932.  The company was the originator of the well-known Basildon Bond brand of writing paper and also manufactured envelopes, note papers, pads, and account books.

The company evolved from the business of William Leschalles, a paper and rag dealer in Bishopsgate, London in 1824. Later Millington's became a major manufacturer of envelopes through the introduction of the first high-speed rotary machines in the UK. In 1896 the company purchased a batch of machine glazed Manilla paper which had failed to meet its intended specification but was excellent for strong, cheap envelopes for which there was an immediate and expanding market. Another major line, introduced  in 1905, was the OUTLOOK envelope made using an exclusive license for the UK from an American company. With these envelopes the address, printed on the correspondence within, could be seen through a window of transparent material. A factory was built in Tottenham, north London, to meet the growing production requirements of the company.

Millington & Sons created the Basildon Bond brand of stationery in 1911. A group of company directors were meeting to discuss the introduction of a new brand of writing paper. They were staying in a country house in a small village in Berkshire and one of the matters arising was a name for this new paper brand. The name of the country house was Basildon Park, which the directors decided to use for their new writing paper.

Millington's main competitor was John Dickinson & Co. In 1918 Dickinson purchased part of the share capital of Millington & Sons and took over the Basildon Bond brand; in 1932 the whole company was acquired. 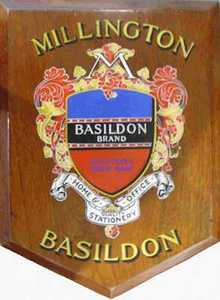 by Mark Matlach
Posted by Michael Behm at 6:29 AM