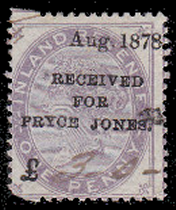 Pryce Jones was a Welsh entrepreneur who created the world's first-ever mail order business. The enterprise began as a drapery shop on Broad Street in Newton, Wales, in 1856. Newton had always had a wool industry and it was the local Welsh flannel which formed the mainstay of Pryce Jones' company.

Post Office reforms and the arrival of the railways in Newton helped turn the small rural concern into a global company. Pryce Jones hit upon a unique method for selling his wares. People would choose what they wanted from leaflets he sent out and the goods would then be dispatched by post and train. It was an ideal way of meeting the needs of customers in isolated rural locations who were either too busy or unable to get into Newton to shop. It was the world's first mail order business and it was to change the nature of retailing throughout the world.

The further expansion of the railways in the years that followed allowed Pryce Jones to take orders from further afield and his company grew rapidly. Large new premises, called the Royal Welsh Warehouse, were built in 1878 to house the expanding business. Pryce Jones was given a knighthood in 1887 for his services to commerce and changed his name to Sir Pryce Pryce-Jones. The Royal Warehouse acquired its own printing press and in 1890 produced its first illustrated catalogue to replace the simple price lists that had been sent out previously.


by Mark Matlach
Posted by Michael Behm at 8:05 AM