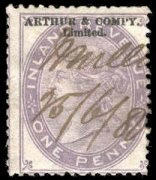 In the 19th century there was a manufacturing firm named Arthur and Company, Limited that had its head office and warehouse in Glasgow. There were factories in London, Leeds, Manchester, Ireland and Scotland as well as an office in New Zealand. I believe that this overprint is from that firm.

There are at least three distinct overprints known from Arthur and Company, and all are on this issue.
Posted by Michael Behm at 6:24 PM