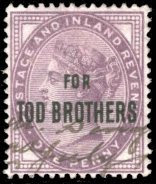 Tod Brothers were flour millers in Stockbridge, Edinburgh from at least 1874. The company's flour mill was severely damaged by a gas explosion and subsequent fire c. 1901.

The company moved to new premises in Leith, Edinburgh. At some point the name was changed to A & R Tod. Commercial overprints with that name are known from at least 1934 to 1943.