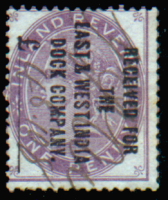 In 1866 the company negotiated an 80-year lease for
their building. Among the uses of the warehouses during this period was the storage of tea.

The freehold of the warehouses was acquired in the 1880s. The company struck a medal commemorating the opening of the East and West India Dock Company's Tilbury Docks in 1886.

The companies were eventually incorporated into a single entity called "The Port of London Authority".
Posted by Michael Behm at 2:17 PM