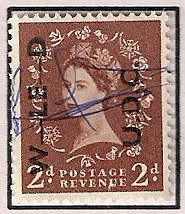 As for Walton-le-Dale, the local government of this community of 11,000 or so used commercial overprints on at least SG 573 and 727.
Posted by Michael Behm at 6:59 AM