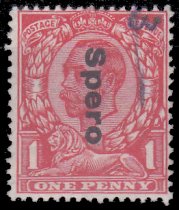 The Spero overprint belongs to the textile manufacturing company Richard Haworth & Co. Ltd. The overprint is notable for its uncommon V1f  style.

In 1852, Richard Haworth established a company in Manchester as a yarn and cloth commission agent. The firm prospered and expanded by leasing a large mill at Broughton Bridge and spinning was added to cloth weaving. Further mills were added, Egyptian Mill (1864), Tatton Mill (1870), and Ordsall Mill (1872). Richard Haworth died in 1866 and his two sons, G.C. And J.F. Haworth, took control of the business, which they converted into a limited company.

The early part of the 20th century was a boom time for the company. Richard Haworth & Co. Ltd. began to offer a wide range of products under the trade mark "Spero", such as dress fabrics, handkerchiefs, corsets, blankets, and sheets. The company also produced canvases for tents and sails. The major portion of the manufacturing was carried out at the company's factories in Salford, Padiham, and Hinkley Green, which employed a total workforce of 2400 people.

Today the company is part of the Ruia Group that comprises of a number of companies that import, supply, and distribute household textiles and hosiery. Richard Haworth & Co. Ltd. supplies bed linen, table linen, and towels to the hospital, hotel, and restaurant markets.