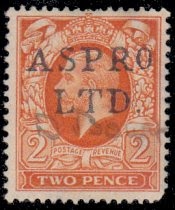 The outbreak of the First World War caused the supply of aspirin from Germany to Australia to be cut off. In 1915 the Australian government announced an initiative to develop an alternative to aspirin, stating that German patents and trademarks would be suspended and then granted to any home-based manufacturer who would meet the required standards of purity.

response to the government scheme, a Melbourne pharmacist called George Nicholas, and an industrialist called Henry Woolf, developed a new product which was initially branded as Nicholas-Aspirin. George soon realised that the name Aspirin could be reclaimed by German company Bayer after the war. In 1917 he adopted and registered the name Aspro for his product. Production of Aspro tablets began in Australia in 1917 and in 1923 manufacturing was also commenced in New Zealand.

In 1927, Aspro Limited was established in the UK to produce and market Aspro tablets in the UK and around Europe. A factory was set up in Slough, Berkshire and the first UK Aspro tablets came off the production line in August 1927. By November UK sales were ahead of Australia. The 1927 winter flu epidemic in the UK increased demand by an extra 12 million tablets a week.

A new factory was built in Slough in 1958 and Aspro Ltd. diversified into the production of vitamin supplements, veterinary products and pharmaceuticals. In 1969 the company was acquired by Nicholas Australia Ltd which became Nicholas International in 1970. In 1981 the business was merged with Kiwi International Ltd. 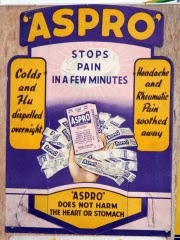 by Mark Matlach
Posted by Michael Behm at 5:00 AM