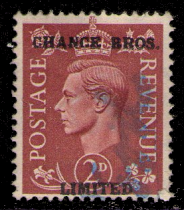 Chance Brothers Limited was at one time a leading glass manufacturer and a pioneer of British glass making technology. The company continues to function today as Chance Glass Limited, a specialized industrial glass manufacturer in Malvern, Worcestershire.

Robert Lucas Chance established the company in Smethwick, West Midlands, in 1824. In1832 William Chance joined his brother in partnership and the company became Chance Bros. & Co. The firm was among the earliest glass works to carry out the cylinder process in Europe and in 1837 it made the first British cylinder blown sheet glass. The company adopted the cylinder method to produce sheet glass, and became the largest British manufacturer of window and plate glass, and optical glasses.

Chance Brothers' projects included the glazing of the original Crystal Palace to house the Great Exhibition of 1851, and the Houses of Parliament, (built 1840 – 1860). At that time it was the only firm that was able to make the opal glass for the four faces of the Westminster Clock Tower which housed the famous bell, Big Ben. Other projects included stained glass windows, ornamental lamp shades, microscope glass slides, painted glassware and glass tubing. In 1889 the business was formed into a public company and became Chance Brothers Ltd. In the early 20th century, many new ways of making glass evolved at Chance Bros. such as the innovative welding of a cathode ray tube used for radar detection.

Pilkington Bros. Acquired a 50 % shareholding in 1945 but the Chance operation continued to be largely separately managed and a factory was established in Malvern in 1947 to specialise in laboratory glass. In 1948 the Malvern plant produced the world's first interchangeable syringe. By the end of 1952 Pilkington had assumed full financial control of Chance Bros., but did not become actively involved in its management until the late 1960s.

In 1992, during a period of rationalisation at Pilkington, a management buy-out reverted the Chance plant in Malvern to private ownership and it once again became an independent company, changing its name to Chance Glass Limited. Since then the company has continued to develop its range of products and processes, and areas now served include the pharmaceutical, chemical, metrology, electronics and lighting industries.

The extensive Chance Bros. Glassworks in Spon Lane, Smethwick, West Midlands. All the buildings are part of the works.


by Mark Matlach
Posted by Michael Behm at 7:09 AM