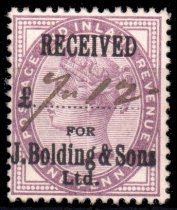 The company was established in 1822 at South Molton Lane in Mayfair, London. In the 1880s the business expanded to the Grosvenor Works in Davies Street and in 1894 became a limited company.

In 1914 the company was described as a manufacturer of high-class sanitary appliances, specializing in both public and private systems of sanitation.

In 1961 J. Bolding & Sons Ltd. had 280 employees and was a manufacturer of sanitary fittings such as water closets, pumps and valves. In 1966 the company purchased its rival, Thomas Crapper & Co., only to go into liquidation three years later.


by Mark Matlach
Posted by Michael Behm at 10:49 AM