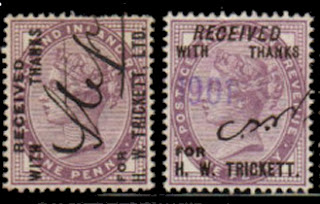 
by Mark Matlach
Posted by Michael Behm at 5:58 AM No comments: 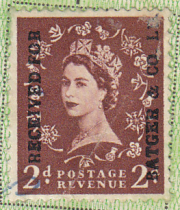 Batger & Co. Ltd. was a confectionery manufacturer in London from 1748 until 1970. Although the early history of the company is sketchy, an Elizabeth Batger made and sold sweetmeats from a shop in Stepney, east London, in 1748.

From the 1860s Batger's had a factory in Stepney and another in Clapham. The main factory in Stepney manufactured jams, bakery sundries, sweets, and toffee. The best-known products were Chinese figs, Silmos lollies, Jersey Caramels, and John Peel marmalade. The Clapham factory produced Harlequin Christmas Crackers and all forms of cake decorations for the bakery industry.

Batger & Co. was acquired by another confectionery manufacturer called Needlers Ltd. in 1970. The business is now part of Ashbury Confectionery Ltd. 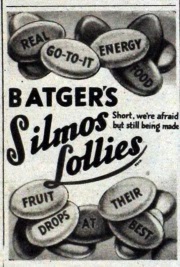 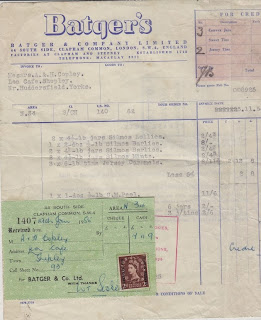 by Mark Matlach
Posted by Michael Behm at 5:53 AM 3 comments: 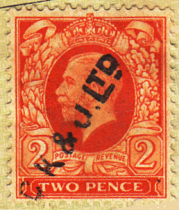 Hulley's Birmingham Directory of 1876 lists the business as “carvers and gilders”; the firm was responsible for some of the carving at the Birmingham Law Courts. Kelly's Directory of 1895 describes the firm as “cabinet makers, carpet factors, upholsterers and decorators”.

The company traded until at least 1956. 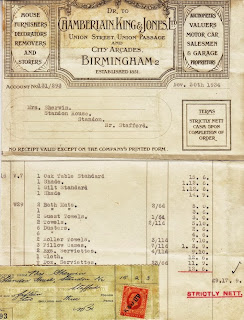 by Mark Matlach
Posted by Michael Behm at 7:04 AM No comments: 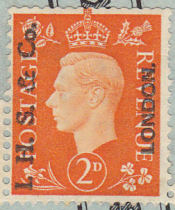 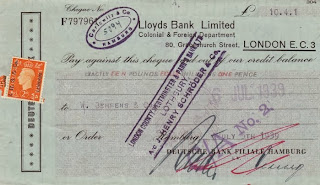 by Mark Matlach
Posted by Michael Behm at 6:52 AM No comments:

For sale or trade

Jeff Turnbull has commercial overprints that are available for sale--or for trade for perfin revenues of Great Britain or former Commonwealth countries. Here are some examples of the material that is available: 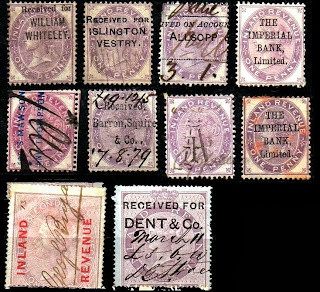 There are also commercial overprints on receipts and some handstamps. Jeff can provide scans.

If you are a collector interested in adding to your collection or a non-collector who is intrigued by this barely explored piece of history, you can contact Jeff at: