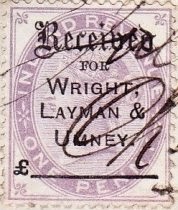 In 1860, William Valentine Wright, with partners  Sellers and  Layman, opened a small wholesale druggist and chemist business at 11 Old Fish Street Hill near St. Paul's Cathedral in London. In 1866 the company developed Wright's Coal Tar Soap, which was to become a hugely popular brand of antiseptic soap that is still being sold today. The soap was made from liquor carbonis detergens, the liquid by-product of the distillation of coal to make coke; the liquid was made into an antiseptic soap for the treatment of skin diseases.

Sellers retired in 1876 and Charles Umney was taken into partnership, and the company's name was changed to Wright, Layman & Umney. At this time the firm was described as wholesale and export druggists, manufacturers of pharmaceutical and chemical preparations, distillers of essential oils, manufacturers and proprieters of Wright's Coal Tar Soap and other coal tar specialities.

William Valentine Wright died in 1877 and two of his sons, Charles and Herbert, subsequently joined the company. By 1898 Charles Umney had taken over the management of the coal tar soap section of the business. In 1899 Wright, Layman & Umney became a private limited company and moved to larger premises in Southwark. In 1909 the firm became a public limited company and was regarded as one of the leading pharmaceutical companies in the country. 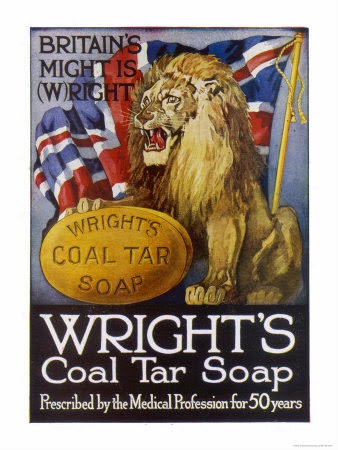 In the late 1960s, the Wright's Coal Tar Soap business was taken over by LRC Products Ltd. who sold it to Smith & Nephew in the 1990s. The soap is now made in Turkey for the current owners of the brand, Simple Health & Beauty Ltd. based in Solihull and is called Wright's Traditional Soap. As European Union directives on cosmetics have banned the use of coal tar in non-prescription products, the coal tar derivatives have been removed from the formula, and replaced with tea tree oil as the main anti-bacterial ingredient. Despite this major variance from the original recipe, the new soap has been made to approximate the look and smell of the original product.


by Mark Matlach
Posted by Michael Behm at 1:15 PM