The following comments were sourced from Modern London, The World's Metropolis c. 1887 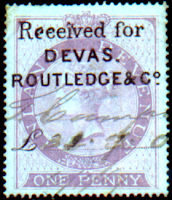 "The old-established and important house Messrs. Devas, Routledge & Co., Limited, stands among the foremost concerns in the London wholesale trade, and has held its position as a commercial undertaking of the first magnitude ever since the date of its foundation in 1801. The business has steadily and continuously progressed and developed in the nearly ninety years of its active existence, and in its present condition it presents many noteworthy features arising from the comprehensive nature of its dealings in the wholesale and export textile trade, and in the manufacture of men's clothing, shirts, &c.

In these branches Messrs. Devas, Routledge & Co. control an immense home and shipping trade, and to them they devote the whole of one of the largest and best organised warehouses in Cannon Street, as well as a large factory in Burdett Road, E. The staff of clerks, buyers, warehouse assistants, and workpeople employed in the various departments of the business is exceedingly numerous; and altogether the firm afford a direct means of livelihood to between seven and eight hundred persons.

Messrs. Devas, Routledge & Co. hold enormous stocks in their Cannon Street warehouse, the following departments being represented by the best classes of goods in their several lines--prints and cretonnes, linens, flannels, blankets, shirts and collars, shawls, oil, baizes, carpets, calicoes, cords, beaverteens, stays, ready-made clothing, woolen cloths and trouserings, Scotch and Manchester muslins, stuffs and merinos, crapes, fancy dresses, mantles, skirts and costumes, mantle clothes and seals, silks and velvets, haberdashery in all its branches, trimmings, umbrellas, hosiery, velveteens, and fancy goods. The last named is one of the most notable of all its departments, and its stock comprises a remarkable variety of fine leather goods, ladies' and gents' bags, jewel cases, dressing and writing cases, traveling trunks and hat boxes, albums, music cases, photo frames, watches and jewelery, japanned goods, fans, cutlery, perfumery--in short, every article known in the fancy trade. The arrangement of these departments in the spacious warehouse of the firm leave nothing to be desired, and makes the establishment most convenient in all parts. By the sound quality of their goods, Messrs. Devas, Routledge & Co. have won the respect and confidence of all their customers at home and abroad, and they enjoy the commercial prosperity due to their honourable reputation in the trade. Their business is conducted with conspicuous care and ability, and valuable connections are maintained in all the British and export markets, an especially large Australian and general colonial trade being transacted."

Devas, Routledge & Co. used several different patterns over a period of about 60 years. The pattern on the George VI issue above was used at least as late as the second QE definitive issue (SG 543b).
Posted by Michael Behm at 6:42 PM