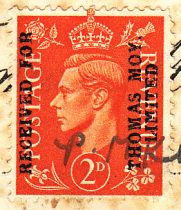 From at least 1861, Thomas Moy was a coal merchant based in Colchester. In 1882 Moy's company was described in the Stratford trade directory as coal, coke, cement, brick, tile, and lime merchants and even ship owners—sea-going colliers carried coal down the east coast to London. Thomas Moy's main business was as a coal merchant, organizing the procurement and delivery of coal to households throughout Essex, as well as neighboring Norfolk and Suffolk.

Thomas Moy established a wagon works in Peterborough sometime before 1890, to build and repair railway wagons for his own coal business and to hire them out for other uses. Moy's wagons would have been seen all over the eastern side of England as far north as Yorkshire, from where the company obtained some of its coal. The business became a limited company in 1891. The railway works changed ownership in 1926, and again in 1931, but continued to operate under the name of Moy's Wagon Co. Ltd. until the mid-1960s.

Thomas Moy was a prolific user of commercial overprints right up to the end of the 1960s.

by Mark Matlach
Posted by Michael Behm at 10:37 AM