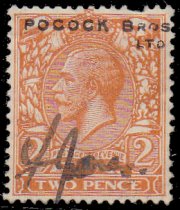 Pocock Brothers Ltd. were boot and shoe manufacturers and retailers in London from 1890. The business was originally established by John Joseph Pocock. Pocock's son Philip joined the company in 1873. When Philip's brother John joined the firm in 1890, Pocock senior retired and the two brothers took control of the business. In 1892 Pocock Brothers had a contract to supply the Metropolitan Police with boots. The company also manufactured footwear for men, women and children, marching boots, mosquito boots for tropical countries and sports footwear including football boots and riding boots. In addition to their shops in London, Pocock Brothers had a number of retail outlets in south east England including shops in Brighton and Sutton. The company traded until at least the 1950s. 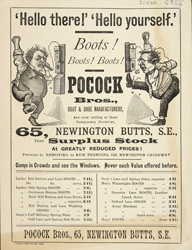