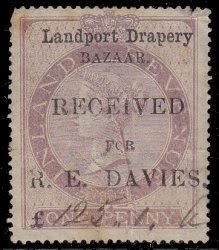 Robert Edmund Davies was a well-known and distinguished businessman in Portsmouth who was three times mayor of the city in the 1860s and 1870s. In 1870 Davies established a department store at Commercial Road, Portsmouth which he named the Landport Drapery Bazaar. The business grew to become one of the largest department stores in the city.

In 1908 the Landport Drapery Bazaar was destroyed by fire and subsequently rebuilt. In 1941 the department store took a direct hit from a German bomb leaving a gigantic crater on the site of the store. The Landport Drapery Bazaar was back in business in the 1950s as part of a newly built shopping centre. In 1965 the store was acquired by the United Drapery Group. In 1982 the company name was changed to Allders, and in 2005 the store was taken over by Debenhams. 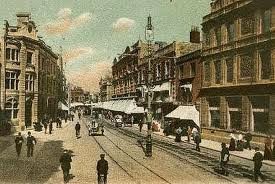 
by Mark Matlach
Posted by Michael Behm at 12:28 PM