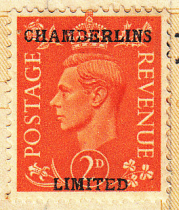 Chamberlins was a department store in Norwich. The store was begun by Scotsman Henry Chamberlin, who came to Norwich from Edinburgh in 1814 and established a drapery shop on the corner of Dove Street and Guildhall Hill a year later. Henry's son, Robert, joined him as partner in 1823 and it was Robert who was responsible for the development of the company's growth in the following years. The shop expanded along the whole length of Dove Street until the premises covered an area of 42,000 square feet. By the end of the 19th century, Chamberlins had departments for millinery, carpets and furnishing, dresses, and ladies' underclothing and employed a staff of 120.

Chamberlins also had a factory at Botolph Street, Norwich. The factory had 800 employees and manufactured clothes. During the First World War, the company produced waterproof clothing for the armed forces. Chamberlins was also contracted to manufacture clothing for the G.P.O. and for workers in munitions factories. At the request of the Government, large quantities of suits were made for discharged soldiers. The war work of Chamberlins totalled close to one million garments and the company received official recognition of the value of its services to the country. 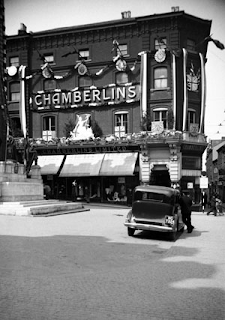 Chamberlins store decorated for the Silver Jubilee in 1935
In the 1930s, Chamberlins' factory in Botolph Street was re-equipped with modern machinery and began to manufacture speciality men's sports clothing under the "Sartella" brand. The company continued to make waterproof clothing and the Government remained the largest customer.

Chamberlins Ltd. was taken over by Marshall & Snelgrove in the 1950s; the site of the store is now occupied by a Tesco supermarket. 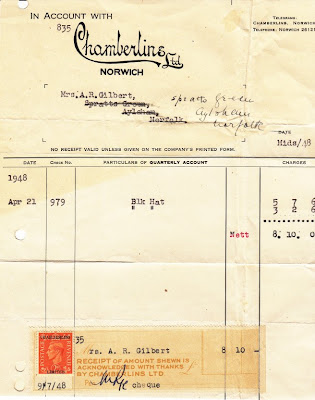 Chamberlins overprints can be found on George V and George VI postage stamps.

by Mark Matlach
Posted by Michael Behm at 2:08 PM