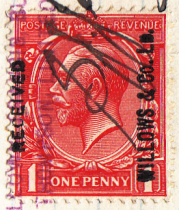 Burgess, Willows & Co. was established in 1751 at 101 High Holborn, London, as a wholesale druggist, manufacturing chemist, distiller, and oil presser. During the 19th century, the company acquired a number of long-established London drug firms. By 1888 the firm was trading as Willows, Francis & Butler and describing itself as a wholesale and export druggist and manufacturer of pharmaceutical and veterinary preparations. At the end of the century, the company was appointed wholesale druggist to the Royal Veterinary College in London. In c1904 the business was incorporated as a limited liability company, Willows, Francis, Butler & Thompson Ltd. and relocated to 40 Aldersgate Street, London.

By the 1930s, the company had moved to Dalston and was manufacturing and supplying human and veterinary preparations and surgical instruments. In 1949 Willows, Francis, Butler & Thompson Ltd. merged with Pharmaceutical Manufacturing Co. Ltd. to form Willows Francis Ltd, which went on to become a major manufacturer of ethical drugs and anaesthetics and exporter of anaesthetics, veterinary and medical specialties and pharmaceutical chemicals. These were produced at the Dalston factory and at a second plant in Epsom, Surrey. 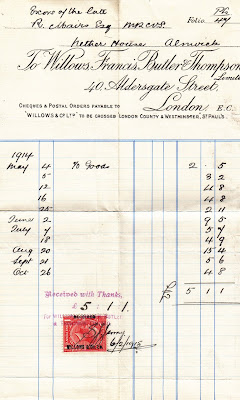 Willows Francis Ltd. was acquired by Guinness Peat in 1979. In 1990 the company was sold on to American Home Products Corporation Inc. and relocated to Crawley where it worked closely with another subsidiary, Fort Dodge Laboratories, the second largest veterinary company in the United States. The Willows Francis trading name was finally abolished in the late 1990s.

by Mark Matlach
Posted by Michael Behm at 7:16 AM