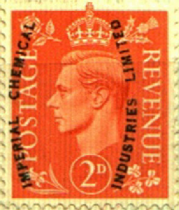 Imperial Chemical Industries (ICI) was a British chemical company, taken over by Akzo Nobel, a Dutch conglomerate, one of the largest chemical producers in the world. In its heyday, ICI was the largest manufacturing company in the British Empire, and commonly regarded as a "bellwether of the British economy." It produced paints and specialty products (including ingredients for foods, specialty polymers, electronic materials, fragrances and flavors). It employed around 29,000 people and had a turnover of just over £4.8 billion in 2006. The company was independent from 1926 to 2008, headquartered for most of that time in Millbank, London, and was a constituent of the FT30 Index and FTSE 100 Index. After the January 2008 change of ownership, AkzoNobel fully integrated ICI's operations. 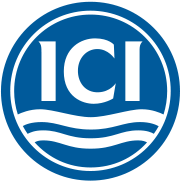 The Company was founded in December 1926 by way of the merger of four companies – Brunner Mond, Nobel Explosives, the United Alkali Company, and British Dyestuffs Corporation. It established its Head Office at Millbank in London in 1928.

In the 1920s and '30s the company played a key role in the development of new chemical products.

In the 1940s and '50s the Company established its pharmaceutical business and developed a number of key products including Paludrine (1940s, an anti-malarial drug), halothane (1951, an anaesthetic agent) etc. ICI formed ICI Pharmaceuticals in 1957.

During the 1980s (from 1982 to 1987), the Company was led by the charismatic John Harvey Jones. Under his leadership the Company acquired the Beatrice Chemical Division in 1985 and Glidden Coatings & Resins, a leading paints business in 1986.

In 1991, the company successfully fought off a hostile takeover bid from the Hanson plc conglomerate. It also divested its Soda Ash Products arm to Brunner Mond, ending an association with the trade which had existed from the company's inception (inherited from the original Brunner, Mond & Co. Ltd.).

In 1993 the company demerged its pharmaceutical bioscience businesses: pharmaceuticals, agrochemicals, specialties, seeds and biological products were all transferred into a new and independent company called Zeneca Group (which subsequently merged with Astra AB to form AstraZeneca PLC).

In 2000 ICI sold its petroleum business at Teesside and Tioxide, its titanium dioxide subsidiary, to Huntsman Corporation for £1.7 billion. It also sold the last of its industrial chemicals businesses to Ineos for £0.3 billion.

Having sold off much of its historically profitable commodities businesses, and many of the new specialty businesses, which it had failed to integrate, the company consisted mainly of the Dulux paints business, which quickly found itself the subject of a takeover by Akzo Nobel.

Dutch firm Akzo Nobel (owner of Crown Berger paints) bid £7.2 billion for ICI in June 2007. An area of concern about a potential deal was ICI's British pension fund, which had future liabilities of more than £9 billion at the time. Regulatory issues in the UK and other markets where Dulux and Crown Paints brands each have significant market share were also a cause for concern for the boards of ICI and Akzo Nobel. In the UK, any combined operation without divestments would have seen Akzo Nobel have a 54% market share in the paint market. The initial bid was rejected by the ICI board and the majority of shareholders. However, a subsequent bid for £8 billion was accepted by ICI in August 2007, pending approval by regulators.

by Paul Green
Posted by Michael Behm at 7:39 AM