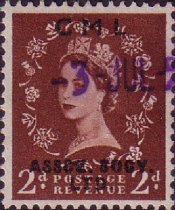 The Colonial Mutual Life Assurance Society Limited (CML) was launched in 1873. Melbourne was by then a city transformed by gold and there were strong aspirations to form cooperative organisations based on mutual benefit. T. Jaques Martin was the Society's founder and first General Manager, and Sir Redmund Barry the first President.

The new Society had its headquarters at 419 Collins Street, and by the end of 1874 had established offices in all other capital cities in the Australian colonies. Attention then turned to overseas and CML branches were established in Fiji (1876), South Africa (1883) and New Zealand (1884). In 1886, CML became the first of the Australian life offices to commence operations in the United Kingdom.

The Society survived recessions and depressions and grew steadily, such that by the 1920s it had outgrown its old premises. It purchased the Equitable Building, then the best known commercial building in Melbourne, in 1923. Soon after, it pioneered the system of payroll deductions for paying insurance premiums.

By the late 1950s, the Company's expansion had once again led to its headquarters becoming inadequate, so a decision was made to demolish and rebuild on site. Appreciating the significance of the building however, CML published both a booklet on its history and an album of photographs. CML continued to diversify its business, moving into the general insurance field then, in 1980, forming a permanent building society as a subsidiary. In the 1990s it extended its activities into Southeast Asia. 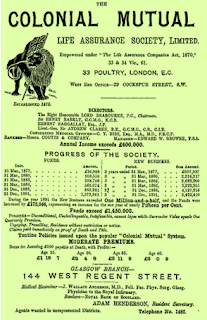 by Paul Green
Posted by Michael Behm at 7:13 AM