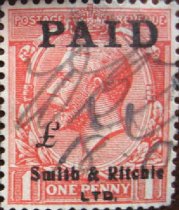 Smith and Ritchie were established in at 71 Albert Street, Edinburgh in 1853. The firm were multi-color offset printers who were specialist suppliers to the food packaging industry. They were located at Amphion Works in Albert Street. In 1963 Smith & Ritchie became the first printing company in Scotland to use a gravure press and produced reel-fed work up to five colors.

Smith & Ritchie moved to Livingston in 1986 and in 1991 became the first printing firm in Scotland to use a 10-station gravure press. 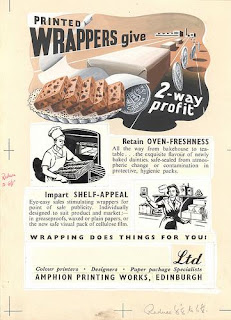 They have subsequently moved out to Livingston and survive today as Amcor Flexibles S & R. Amcor, who are originally an Australian company, now have operations in 36 countries around the world specializing in many printed products of which the food packaging that Amcor Flexibles S & R is one.

by Paul Green
Posted by Michael Behm at 9:58 AM