D. E. R. Ltd. was a TV rental company that was established in 1938 as a single shop in Twickenham, Middlesex. 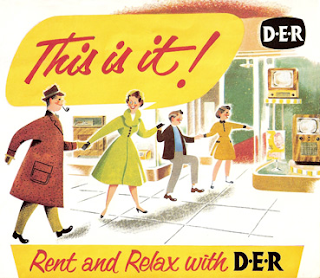 Radios and the earliest type of television receivers were rented throughout Greater London. Rental charges were competitive and covered full maintenance, service and renewals. The unreliability of television at this time gave D.E.R. Ltd. the opportunity to make significant profits and the company quickly expanded outside of London, establishing regional offices and shops in the Home Counties, Scotland, Wales and southern England.

Eventually the rental market started to tail off as the reliability of television sets improved. Around 1968, D.E.R. Ltd. merged with rival company Radio Rentals and became part of Thorn Television Rentals, which became part of the merged Thorn-EMI in 1980.

D.E.R. Ltd. overprints are common on  2d Wildings and 2d Machins, although there are minor varieties in the thickness of the font.


by Paul Green and
Mark Matlach
Posted by Michael Behm at 9:49 AM