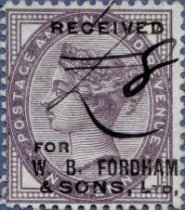 W. B. Fordham of 36-40 York Road, Kings Cross, London was established in 1825. On the 7th December 1885 the company was registered, to take over the business of the firm of this name as hardware factors, manufacturers, and contractors.

W. B. FORDHAM & SONS Ltd. (In Voluntary Liquidation.)
The Companies Act, 1929.
Notice is hereby given that General Meetings of the shareholders and creditors of the above named Company will be held at the Institute of Chartered Accountants, Moorgate Place, London, E.C.2, on Monday, the 31st day of October, 1932, at 11 o'clock and 11.30 o'clock in the forenoon respectively, to receive the account of the Liquidator, showing how the winding-up of the Company has been conducted and its property disposed of, and to hear any explanation that may be furnished by the Liquidator, and to pass a Resolution as to the disposal of the books, accounts, and documents of the Company.


by Paul Green
Posted by Michael Behm at 9:34 AM