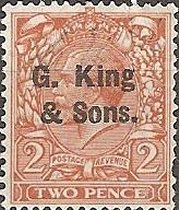 The firm of G. King and Son established themselves as glaziers in the Cathedral Close, Norwich in 1927. The firm’s founder, Dennis King, initially worked alone, until he was joined by his father, George King, who had worked with a firm of decorative plasterers and mosaic-workers. He had specialized in gilding and the leading of windows, after training with William Weyer.

Much of the firm’s early work was on pubs and cinemas, but by the 1930s, working from larger premises in King’s Lane Norwich, they had started restoring ecclesiastical glass. Under Dennis’s direction, the business became the leading stained glass conservation firm in Britain. 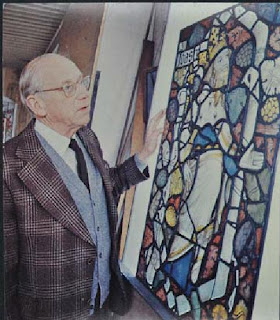 King and Son worked on many of the parish churches of East Anglia, and also on many other key sites for surviving stained glass nationally, including Great Malvern Priory, Wells Cathedral, Highcliffe Castle and many Oxbridge colleges. Internationally, they worked on commissions as far afield as Athens, South Africa and Canada. Dennis King also acted as a consultant to conservation workshops at York and Canterbury, and he advised on the creation of the Stained Glass Museum at Ely. No other British studio has handled so much conservation work in connection with historic stained glass.

Dennis King was made a freeman of the City of Norwich in 1933, and of the City of London in 1969; he became a Fellow of the Society of Antiquaries in 1959; and was appointed Officer of the Order of the British Empire in 1979 for services to the conservation of stained glass. He was also a liveryman of the Worshipful Company of Glaziers and Painters of Glass, a member of the International Technical Committee of the Corpus Vitrearum Medii Aevi and was awarded the honorary degree of Master of Arts at the University of East Anglia in 1994. He continued to work as an adviser to his son, Michael, into his eighties and died after a short illness in March 1995.

In late 2003, the business was wound up on the retirement of Michael King, Dennis King’s son.

by Paul Green
Posted by Michael Behm at 9:54 AM