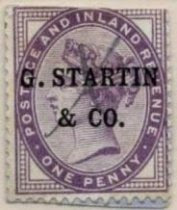 Records from the early 1800s show three brothers - John, Samuel and James Startin trading as Startin & Co. Merchants, Birmingham. This partnership dissolved, first in 1807, leaving John and James to carry on trading, then again in 1814; the business was eventually carried on by James Startin.

JAMES STARTIN (Birmingham 1773 -1846) married Sarah Thrupp (London 1782-1866) in Bishopsgate, London in January 1805. Amongst the many children were GEORGE STARTIN (b. 1809) and John Startin (b. 1815). Also James Startin, a famous surgeon and founder of the London Skin Hospital, who treated Charles Darwin’s eczema.

Trading as a Colonial Sugar Merchant at 150 & 151 Fenchurch Street, London EC from as early as 1846 (source Post Office Trade Directories).

Thanks to Queen Victoria’s vast British Empire and the onset of the Industrial Revolution, travel around the globe became more and more possible and the ability to trade easier. It would seem that many of the Startin family were directly involved in the business, acting as agents and merchants. The fleets would bring the produce directly from the Americas into the UK ports.

On 31st December 1880 – The partnership between GEORGE STARTIN , his son CHARLES WILLIAMS STARTIN, Horace Mason and Robert Alexander was dissolved. George Startin Senior retired to Torquay, Devon and the three remaining partners carried on trading in the same style under the name of George Startin & C.o as Sugar Merchants and Wholesale Grocers. Listed in the Post Office Business Directory 1884 to 1899 T A "Startin".

This left CHARLES WILLIAMS STARTIN as sole trader under the name of George Startin & Co. In April 1900, he had moved to Rood Lane, London trading as a wholesale dealer in Sugar and Fruit. Due to several bad debts and the sudden drop in the price of dried fruit in the previous year, CHARLES WILLIAMS STARTIN was declared bankrupt in 1901 and George Startin & Co. ceased trading in its original form. (Source, London Gazette, The Times and Richard Trounson, Great Grandson of Charles Startin).

Once GEORGE STARTIN & CO., had been wound up, BAKER & STARTIN were free to adopt the T A "Startin". They were listed in the Post Office Commercial Directory 1900 - 1915 as Mica and Mineral Brokers and Manganese Merchants. This company, along with Howard’s own Mica Supply Co. Ltd., traded worldwide. Mica was mined in several countries including Brazil, South Africa, and India. It is unclear when Baker & Startin parted company but for another 15 plus years HOWARD STARTIN carried on trading as a Mica broker; however, in 1932, at the age of 70 and as Chairman he announced the voluntary liquidation of STARTIN & CO.LTD. It is known that Howard had a son, George, (born 1891) who worked as a clerk for the company but there is no further documentary evidence to suggest that any member of the Startin family continued with the business.

STARTIN & CO. as mica and produce brokers reformed with brothers OLIVER GEORGE IRONS AND WILFRID JOHN IRONS once again trading in the City at 112-113 Fenchurch Street, London EC. Oliver retired in 1947, thus leaving John to continue the business. On his retirement, the company was transferred to Mr Cooke.

STARTIN & CO was one of only five commodity brokers in the City. Importers were prohibited from selling direct to any company, therefore all deals had to be passed through the broker, who would not make any profit but take a ‘brokerage’, normally 2% of the sale. During both World Wars, members of the Board of Trade for Mica held government stocks for sale to the trade and auctions were held. After WW2, the excess mica was dumped in the sea but later reclaimed and sold through the brokers. Following this the government changed the law and mica, along with all other commodities, could be freely traded, which meant the broker was permitted to import and sell for his own account.

In 1965, the business was bought by JOSEPH BOWYER (b.1921 - ) and for some years the offices remained at 110 Fenchurch Street. Startin & Co became a limited company once again in 1970, with Joe taking the title of Managing Director and his wife Doris (1923-1986) Company Secretary. Joe has been in the mica business all his working life and has considerable knowledge of the trade. He was given the honour of becoming a Freeman of the City of London in October 1982, and also spent some time as Head of the Mica Section at the London Chamber of Commerce, when he was introduced to HM The Queen and HRH Duke of Edinburgh at the Guildhall. Startin & Co.Ltd is the last known remaining Mica Broker in the UK, although it has been some years since the company has been asked to act in this capacity.

The company in 2011 is still a family run business, importing mica and other related products direct from its excellent connections in India. It supplies quality mica and processed parts to the trade in the UK, Europe and Worldwide. Joe is still an active Managing Director, working alongside his daughter Carol (1953 - ) and cousin Margaret Andrews (1946- )

by Paul Green
Posted by Michael Behm at 2:09 PM