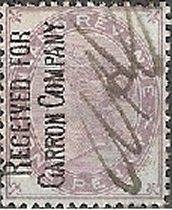 The Carron Company was an ironworks established in 1759 on the banks of the River Carron near Falkirk, in Stirlingshire, Scotland.

It was founded as a partnership by Dr. John Roebuck, a chemist, Samuel Garbett, a merchant, and a wealthy Scottish shipowner, William Caddell. The factory of "Roebucks, Garbett and Cadells" was established on the north bank of Carron Water, 2 miles north of Falkirk. Taking iron ore from Bo'ness and water from the Carron, they decided to use the new method pioneered by Abraham Darby at Coalbrookdale, using coke from coal mines in the vicinity as fuel rather than the usual charcoal. The works helped to push other less technologically advanced ironworks, such as the Wealden iron industry based in the Weald, out of business. 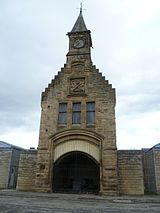 The first blast furnace became operational on 26 December 1760, producing pig iron. However, when the factory started to produce cast iron goods, they were of a generally poor quality. Nevertheless, in 1764, the Board of Ordnance granted the company a lucrative contract to supply armaments to the British armed forces. The company also cast parts for James Watt's steam engine in 1765.

The company received a royal charter to incorporate as the Carron Company in 1773. However, despite their best efforts, the quality of the company's products remained low, this resulted in the company's contracts to supply the Royal Navy being cancelled in 1773.

Undeterred, the company pushed forward the development of a new type of cannon, shorter and therefore much lighter than a long gun of the same calibre known as the "Carronade".

The carronade was a considerable success, and remained in production from 1778 through to the 1850s. The company established such a reputation for quality that the Duke of Wellington remarked in a letter to Admiral Berkley in 1812 that he only wanted cannon manufactured by the Carron Company in his army. The company also made ammunition, including some invented by Henry Shrapnel.

By 1814, the Carron Company was the largest iron works in Europe, employing over 2,000 workers. They continued to produce pig iron through the 19th century, together with cast-iron products such as balustrades, fire grates, and the Carron bathtub. The company ran its own shipping line and produced munitions in both World Wars. It later became one of several foundries producing pillar boxes and was one of five foundries casting Sir Giles Gilbert Scott's classic Red telephone boxes. In the 1960s, it produced cast-iron rings to line the Tyne Tunnel under the River Tyne from Jarrow to Howdon and the Clyde Tunnel under the River Clyde from Whiteinch to Govan near Glasgow.

The company diversified into plastics and stainless steel, but the works went into receivership in 1982. The company was bought over and still operates today under the name of Carron Phoenix, part of the Franke corporation. Like its predecessor, The Carron Company, Carron Phoenix's headquarters are at the Carron Works in Falkirk.

Carron Phoenix produces stainless steel, ceramic and granite molded sinks that are sold around the world; however, some areas of production have been moved to China and Slovakia.


by Paul Green
Posted by Michael Behm at 8:24 AM