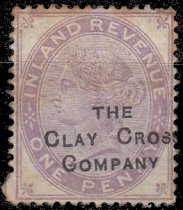 While driving the tunnel for the North Midland Railway, the railway pioneer George Stephenson discovered deposits of coal, iron, and limestone near a small village in Derbyshire called Clay Cross. In 1837, Stephenson moved into Tapton Hall, near Chesterfield, and set up a mining company called George Stephenson & Co. Although the company had been formed to mine coal and manufacture coke, by 1847 the price per ton of coal had fallen sharply and Stephenson turned to brick making and the production of iron. George Stephenson died in 1848 and his son Robert took over the business. When Robert left the firm in 1852, the name was changed to the Clay Cross Company. 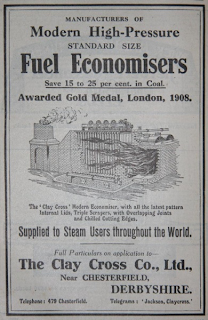 In 1966 the Clay Cross company went public and in 1974 it was acquired by RMC (Ready Mixed Concrete), mainly for its quarries. In 1985, after RMC changed ownership a number of times, the company was bought by the Biwater Group. In 2000 Biwater sold the Clay Cross site to French company, Saint-Gobain. Some months later it was closed down with the loss of around 750 jobs. Demolition of the vast site began in late 2008.

By Mark Matlach
Posted by Michael Behm at 6:09 AM