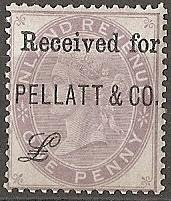 The son of glassware makers Apsley Pellatt (1763–1826) and Mary (née Maberly) Pellatt, Apsley joined the family glass-making company of Pellatt and Green in 1811. He took over the London-based glass-works on his father's death, renaming it Apsley Pellatt & Co.

Apsley Pellatt married twice; first in 1814 to Sephonia Kemp and second in Streatham in 1816 to Margaret Elizabeth Evans of Balham, with whom he had one son (who died young) and four daughters.

His main interest lay in the chemistry of glass-making. In 1819, he took out his first patent for the manufacture of "sulfides" or Cameo Incrustations. Pellatt originally called them "Crystallo-Ceramie," reflecting their French origin. The process involved the embedding of ceramic figurines into the glass sides of paperweights, jugs, decanters, etc., by cutting a hole in the hot glass, sliding in the insert, and resealing the glass afterward.

Pellatt became the most famous and successful producers of sulfides in England from 1819 to the mid-century rivalled only by Baccarat in France. He described their manufacture in a book on glass-making entitled "Curiosities of Glassmaking" published in 1849. After his retirement around 1850, the glass-works went into decline in the hands of his brother Frederic.