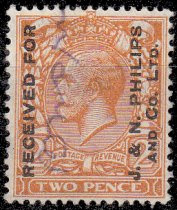 J. & N. Philips & Co. Ltd. was a textiles and clothing manufacturer. The business was established by John and Nathaniel Philips in Tean, Staffordshire in 1747. John and Nathaniel were joined by their brother Thomas a few years later. As the company grew, branches were established in Manchester, Radcliffe and Whitefield, near Bury. The two younger brothers also set up a hat-making enterprise under the name of Thomas & Nathaniel Philips.

J. & N. Philips & Co. went on to become a nationwide merchanting and manufacturing company. The firm produced Dorcan fabrics and all types of ready-made clothing. In 1915, the business became a limited company: J. & N. Philips & Co. Ltd. During the Second World War, the company's Manchester premises were requisitioned as a site for the censorship of mail of British prisoners of war.