News of The World 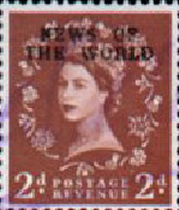 The News of the World is a national tabloid newspaper published in the United Kingdom every Sunday. It is published by News Group Newspapers of News International, itself a subsidiary of Rupert Murdoch's News Corporation, and is the Sunday sister paper of The Sun. The newspaper concentrates on celebrity-based scoops and populist news.

The newspaper was first published on 1 October 1843, in London by John Browne Bell. Priced at just three pence, even before the repeal of the Stamp Act (1855) or paper duty (1861), it was the cheapest newspaper of its time and was aimed directly at the newly literate working classes. It quickly established itself as a purveyor of titillation, shock and criminal news. Much of the source material came from coverage of vice prosecutions, including transcripts of police descriptions of alleged brothels, streetwalkers, and 'immoral' women.

Before long the News of the World established itself as the most widely read Sunday paper, with initial sales of around 12,000 copies a week. Sales then suffered because the price was not cut following the abolition of newspaper taxes and the paper was soon no longer among the leading Sunday titles, selling around 30,000 by 1880, a greater number but a smaller proportion as newspaper sales had grown hugely. The title was sold by the Bell family in 1891 to Lascelles Carr who owned the Welsh "Western Mail". As editor he installed his nephew Emsley Carr, who held the post for 50 years. But the real engine of the paper's now quick commercial success was George Riddell who reorganized its national distribution using local agents. Matthew Engel in his book "Tickle the Public: One Hundred Years of the Popular Press" says that the "News of The World" of the 1890s was "a very fine paper indeed". The paper was not without its detractors, though. As one writer later related:

Frederick Greenwood, editor of the Pall Mall Gazette, met in his club one day Lord Riddell, who died a few years ago, and in the course of conversation Riddell said to him, "You know, I own a paper." "Oh, do you?" said Greenwood, "What is it?" "It's called the News of the World—I'll send you a copy," replied Riddell, and in due course did so. Next time they met Riddell said, "Well Greenwood, what do you think of my paper?" "I looked at it," replied Greenwood, "and then I put it in the waste-paper basket. And then I thought, "If I leave it there the cook may read it —so I burned it!"

By 1912 the circulation was two million and around three million by the early 1920s. Sales reached four million by 1939. This success encouraged other similar newspapers, of which the Sunday People, the Daily Mail, the Daily Express and the Daily Mirror are still being published.

By 1950 the News of the World had become the biggest-selling newspaper in the world with a weekly sale of 8,441,000 and individual editions sold over 9 million copies.

The newspaper passed into the hands of Rupert Murdoch's News Ltd. in 1969, snatching the paper from Robert Maxwell's Pergamon Press after an acrimonious year-long struggle. Maxwell's foreign origin, combined with his political opinions, provoked a hostile response to his bid from the Carrs and from the editor of the News of the World, Stafford Somerfield, who declared that the paper was—and should remain—as British as roast beef and Yorkshire pudding.

News Ltd. arranged to swap shares in some of its minor ventures with the Carrs and by December it controlled 40 percent of the NOTW stock. Maxwell had been supported by the Jackson family (25% shareholders), but Murdoch had gained the support of the Carr family (30%) and then-chairman William Carr.

In January 1969, Maxwell's bid was rejected at a shareholders' meeting where half of those present were company staff, temporarily given voting shares. It was Murdoch's first Fleet Street acquisition. Maxwell accused Murdoch of employing "the laws of the jungle" to acquire the paper and said he had "made a fair and bona fide offer... which has been frustrated and defeated after three months of [cynical] manoeuvering." Murdoch denied this, arguing the shareholders of the News of the World Group had "judged [his] record in Australia."

Illness removed Sir William Carr from the chairmanship in June 1969, and Murdoch succeeded him.

The newspaper has often had to defend itself from libel charges and complaints to the Press Complaints Commission as a result of certain news-gathering techniques, such as entrapment, and contentious campaigns. Some of the best-known cases have been the "Bob and Sue" case with reporter Neville Thurlbeck, and various cases involving journalist Mazher Mahmood.

From 1981, a magazine (Sunday) was included with the paper, and in 1984 the paper itself changed from broadsheet to tabloid format. The paper is printed in London, Liverpool, Dinnington near Sheffield, Portsmouth, and Glasgow, with separate Irish editions produced in Belfast and near Dublin. It is also printed at a number of sites abroad including Madrid, Brussels, Cyprus, and Orlando in Florida, USA.

by Paul Green
Posted by Michael Behm at 5:51 AM