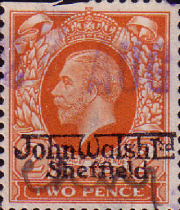 John Walsh Ltd., department store retailers, was founded in Sheffield, Yorkshire, England, in 1875 by John Walsh, and initially traded under the name John Walsh. By 1888, the company had expanded its existing premises at 39 High Street, Sheffield, through the acquisition of a number of short and long term leases on adjacent and neighboring premises, which were situated on the north and south side of the High Street, Sheffield. In 1902 , the year following John Walsh's retirement from active management, the company was incorporated as a private limited company. Five directors were drawn from the Walsh family; John Walsh became the chairman of the board of directors, while his two sons and two sons-in-law constituted the remainder of the board.

The company traded in the sale of silks, dresses, millinery, ribbons, laces, flowers, feathers, toys, stationery, patent medicine and other goods, as well as maintaining restaurant and writing rooms. The company also made furniture and carried out household removals, so that in 1906 a new cabinet factory, warehouse, and furniture depository was built in Pinford Street, Sheffield. A residential property was acquired at Glossop Road, The Mount, Sheffield. In 1920, the company was incorporated as a public limited company, John Walsh Ltd.

During the 1939-1945 World War, the premises on High Street were destroyed due to an air-raid bombing, and subsequently a temporary war-time store was opened at The Mount. By the end of 1941, the company resided in premises at 41-45 Fargate, Sheffield, (previously used as assistants' accommodation), and at Church Street, Sheffield. The Pinfold Street factory was made into a separate company, John Walsh Manufacturing Company Ltd., for administrative reasons in 1944 . This offshoot company operated until its closure in 1957 .

by Paul Green
Posted by Michael Behm at 2:59 PM