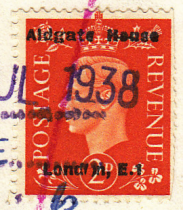 Portals was a paper manufacturer which traces its origins to 1712, when Henry Portal, a French Huguenot who had fled to England to escape religious persecution, began making stationery paper at a mill in Whitchurch, Hampshire. The quality of his paper became so renowned that he was asked to make paper for the Bank of England. Deals with other banks followed, including the Bank of Ireland and the General Bank of India. After banknote forgery emerged as a major problem in the early 19th century, the company began making paper with elaborate watermarks. In 1855 Portals made the paper for the first Bank of England note containing a shaded watermark. In 1880 Portals supplied paper for the first UK Postal Orders, and five years later began making paper for the Bank of Scotland.

During the early 20th century, Portals rapidly expanded its base of international customers. In 1915 the company began making paper for the Indian Rupee, then in 1921 started making banknote paper for Chile. By 1929 Portals was making paper for 41 banknote issues around the world. Building security features into its paper became a speciality of Portals. In 1940 the company pioneered the weaving of a fine security thread of special composition into its paper, a procedure that became standard industry practice.

In 1995 Portals was acquired by De La Rue, the world's largest commercial security printer and paper maker, in a deal worth £682 million. 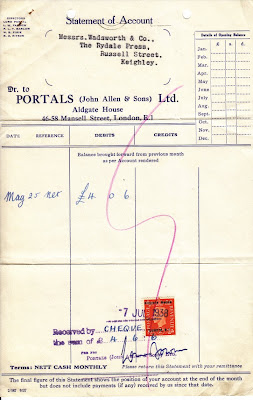 The overprints are most common on the George VI 2d stamps but are also known on SG 573. There are varieties in the style and font of the overprint.

By Mark Matlach
Posted by Michael Behm at 10:27 AM