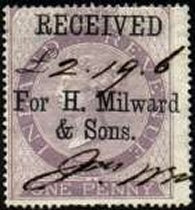 The needle industry in Britain began in the 16th century when it was introduced by Flemish refugees. A chartered guild of master needle makers was formed, called The Worshipful Company of Needle Makers. The manufacture of needles was originally a cottage industry and by the late 17th century it had reached the small town of Redditch in Worcestershire.

In 1730 Henry Millward & Sons was founded in Redditch by Symon Millward. Symon's son Henry took over the business in 1770 and by the end of the 18th century the company was the largest manufacturer in the whole district. By the end of the next century Henry Millward & Sons had the largest factory in England for the production of needles. The quality and excellence of Millward's needles received international acclaim.

Henry Millward & Sons played an active part in the amalgamation of the needle industry in Redditch. It absorbed several local companies and became The English Needle & Fishing Tackle Company in 1932. This company became Needle Industries Ltd. in May 1946 and in 1961, following further mergers, it became Needle Industries Group Ltd. In 1973 the Scottish textile company Coats Paton took over the structure. In 1984 Coats Paton acquired another needle making company, Aero Needles Group Ltd., forming the largest needle company in the world, which at its peak employed 15,000 people.

By Mark Matlach
Posted by Michael Behm at 6:28 AM