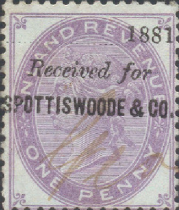 The Company which eventually became known as Spottiswoode Ballantyne was founded in 1739 in London by a Scotsman, William Strahan (1715-85). Strahan forged for his business a national and even transatlantic reputation with a distinguished list of clients and correspondents. In 1755 the firm printed Dr Johnson's English Dictionary. Strahan's correspondents included the Wesley brothers and the American statesman, Benjamin Franklin. In 1770, with Charles Eyre, Strahan purchased the patent of King's Printer (subsequently renewed by his successors) to run for 30 years. This separate business was known as Eyre and Strahan, afterwards Eyre and Spottiswoode, well-known for printing parliamentary publications such as the Statutes at Large series.

The Spottiswoodes, Andrew and Robert, nephews of Andrew Strahan, the son and successor of the founder William Strahan, entered the partnership in 1819 on their uncle's retirement. Trading as Spottiswoode & Co. (it was formed into a limited company in 1900) the firm expanded greatly in and around its London site in the 19th century. In 1900 it acquired the Eton College Press. In 1908 another printing works was opened in Hawkins Road, the Hythe, Colchester on the site it still occupies today. In 1915 the Scottish Printers Ballantyne Hanson & Co. transferred their printing business to Spottiswoode & Co., and the new firm became known as the Ballantyne Press, Spottiswoode Ballantyne & Co. Ltd., London, Colchester and Eton. This added another dimension to the firm's history, its Scottish acquisition having been the printers of the children's books of R.M. Ballantyne and some of the works of Sir Walter Scott.

The firm's printing business was moved totally from London to Colchester in the 1930s. The association with the Eton College Press ended in 1946. In 1955 Spottiswoode Ballantyne was taken over by the McCorquodale Group and W.B. Clowes became managing director-William Clowes & Sons was the book printing division of the McCorquodale Group.

In 1984 all composition work was transferred to a new site at Severalls Lane, Colchester, and the new company, since sold to Ician Communications, was named SB Datagraphics. In 1987 the McCorquodale Group was taken over by Norton Opax PLC and in 1989 Spottiswoode Ballantyne was acquired by the Serif Cowell Group PLC.

by Paul Green
Posted by Michael Behm at 2:55 PM