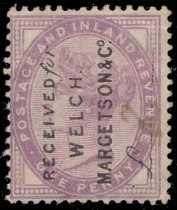 Welch, Margetson & Co. was a menswear clothing manufacturer and wholesaler from 1824 to 1963.

The company was established in London in 1824 by Joseph Welch who became regarded as a pioneer in shirt making. The business grew to have a total of eight department stores in the UK. The London store specialised in high quality menswear, especially shirts and ties, and whole departments were given over to items such as sock suspenders and umbrella handles.

Through its London warehouse, Welch Margetson distributed shirts all over the world. The company had a huge factory in Derry, Northern Ireland (est. 1876) which employed a workforce of 1000 people, while work was also sent out to outworkers, giving employment to 3000 girls in their homes.

Welch, Margetson & Co was taken over by CoatsPatons Ltd. in 1963, however, to this day it is still possible to buy ties in Welch Margetson basket-weave on the internet.