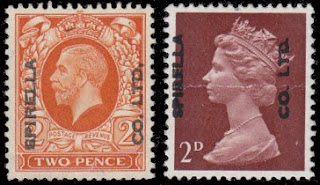 "Pa" Beaman invented the flexible corset stay in 1904. The potential of this invention was recognised by American enrepreneur William Wallace Kincaid, who launched a corset company in the United States the same year, named after the spiral wound device that Beaman had engineered. Thus the Spirella Corset Company was established.

In 1909, Kincaid sailed to Britain, recognising a potential market for the company. On 27th May 1910 the Spirella Corset Company of Great Britain was formed and, according to the sales pitch of the time, "English womanhood was born again". The company set up its head office in Letchworth and called it Spirella House. 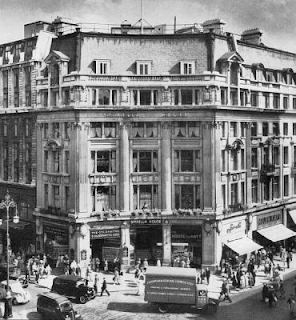 Spirella House, Oxford Street in the early 1950s
Although times were hard for the business during the First World War, Spirella survived, and in the 1920s expanded its manufacturing base to Malmo, Copenhagen and Berlin. After the Second World War, Spirella opened a showroom in Oxford Circus, London. One of the features of the Spirella Corset Company was that their products were made-to-measure and never sold in shops. Instead, female staff called corsetiers were sent out to potential customers' homes.

As corsets declined in popularity from the 1960s, Spirella experienced a rapid fall in customers. The business was eventually taken over in 1985 by rival company, Spencers of Banbury, and finally closed down in 1989.

By Mark Matlach
Posted by Michael Behm at 10:42 AM