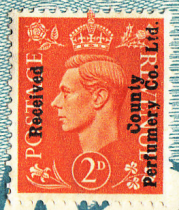 County Perfumery Company Ltd. was a firm that made and sold perfumes and toiletries. The business was based at Honeypot Lane in Stanmore, Middlesex and was best known for manufacturing Brylcreem.

Brylcreem is a brand of hair styling products for men. The first Brylcreem product was a pomade created in 1928 by County Chemicals Company at the Chemical Works in Birmingham. The pomade is an emulsion of water and mineral oil stabilised with beeswax. The purpose of the product was to keep combed hair in place whilst giving a high, glossy shine. Brylcreem was popular with men during and after the Second World War. Brylcreem hairstyles were influenced by American movie idols and were very popular with Royal Air Force pilots who became known as the Brylcreem Boys. 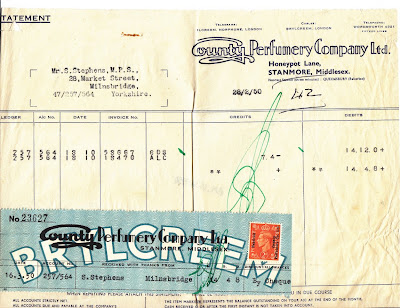 In 1939 County Perfumery Company Ltd. was acquired by the pharmaceutical company Beecham Group, which is now part of GlaxoSmithKline. 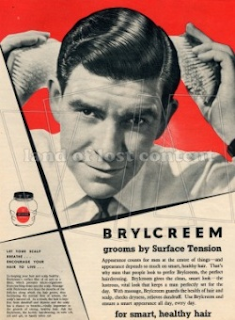 By Mark Matlach
Posted by Michael Behm at 5:16 AM