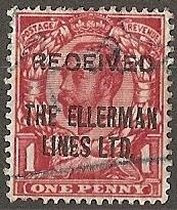 Ellerman Lines was a cargo and passenger shipping company that operated from the late 19th century and into the 20th century. It was founded in the late 19th century, and continued to expand with the acquisition of smaller shipping lines until it became one of the largest shipping firms in the world. Setbacks occurred through heavy losses to their merchant fleet during the First and Second World Wars, but were overcome in each case.

The company suffered from competition and modernizing trends in the shipping industry that occurred during the second half of the 20th century. Its shipping assets were subsequently sold off to larger companies until the name was dropped in 2004, and Ellerman finally ceased its long association with shipping. 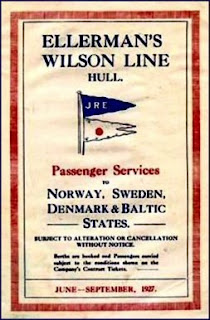 The company expanded in 1900 with the acquisition of 20 ships from the West India and Pacific Steamship Company. The firm was then reorganised as Frederick Leyland (1900), and operated with a capital of £2,800,000. In 1901, the company was bought by J. P. Morgan's International Marine Mercantile Company, though Ellerman remained as chairman, and owner of 20 ships. He later acquired the Papayanni Steamship Company and eight of their ships. He used these assets to form the London, Liverpool and Ocean Shipping Company, based at Moorgate, in London.

The London, Liverpool and Ocean Shipping Company then went on to acquire 50 percent of George Smith and Sons' City Line, Glasgow, and 50 percent of the Hall Line Ltd in 1903. Its capital was further increased, and the name was changed to Ellerman Lines. The company had its head offices in Liverpool and Glasgow, with a subsidiary office in London. Further acquisitions followed in 1908, when the company bought Bucknall Steamship Lines who operated on numerous routes between the United Kingdom, South Africa, the near East and North America. The Ellerman group of companies now occupied a dominating position in the Mediterranean and Near East. By 1914, the Ellerman group controlled four subsidiary companies, Ellerman City Line, Ellerman and Bucknall (Steamships) Company, Ellerman and Papayanni Lines, and Hall Line.

Ellerman's position as a major shipping firm meant that a large portion of its fleet was requisitioned by the British Government on the outbreak of the First World War, for use as troop carriers, munitions carriers, or for conversion into Armed merchantmen to augment the Royal Navy. Ellerman continued to operate a skeletal service with their remaining ships, and in 1916 the Wilson Line of Hull was purchased by Ellerman personally, bringing sixty-seven short-sea vessels into service with the company.

Heavy losses were suffered by the various companies controlled by Sir John Ellerman. In all, 103 ocean vessels, with a total cargo capacity of 600,000 to 750,000 tons, were destroyed. Ellerman Lines sought to restore a pre-war level of service after the end of the war. This entailed the purchasing of several German liners as well as placing orders for new ships. Before long the old networks of passenger and cargo services had been restored. John Ellerman died a baronet with a fortune of £37 million in 1933.

By 1939 and the outbreak of the Second World War the fleet had been successfully rebuilt and expanded, to the extent that the Ellerman groups owned a total 105 ships with a combined capacity of 920,000 tons. This made Ellerman's one of the biggest fleets in the world. Many of these ships were subsequently requisition by the government, whilst others were kept as cargo vessels to transport supplies to the United Kingdom. Losses during the war were heavy, particularly to Germany's U-boat fleet. In total, the Ellerman Group lost 60 ships out of its fleet of 105.

As with the period after the losses of the First World War, a new building programme was undertaken. The focus was on re-building their international trade routes and to this end they purchased outright 12 cargo ships from the Government which they had managed during the war. By 1953, Ellerman's fleet had been almost completely rebuilt, consisting of a total of 94 ships with a carrying capacity of 900,000 tons.

Trading was however becoming more difficult with newly independent nations, such as India, setting up their own shipping companies. The nature of shipping was also changing, with the advent of containerization. In 1966 Ellerman Lines joined the Associated Container Transportation (ACT) Group consortium and started the successful containerization of its Mediterranean services. By the early 1970s the Ellerman group had expanded its commercial interests into other areas, including hotels, brewing and printing. In 1973 it merged all its shipping companies into one division. Ten years later its profitability had plummeted and it was making heavy losses. The whole business was then sold to the Barclay brothers. In 1985 the shipping business was purchased by its management, then sold to the Trafalgar House conglomerate, who merged it with their ownership of the Cunard Line to form Cunard-Ellerman in 1987. In 1991 they passed it to the Andrew Weir Shipping Group, who sold it to Hamburg Süd in 2003. During 2004 the name was dropped and Ellerman Lines ceased to exist.

by Paul Green
Posted by Michael Behm at 7:33 AM