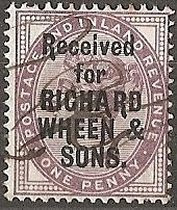 Richard Wheen was a soap manufacturer of Deptford, who lived at Colonnade House, No. 7 South Row, Blackheath, from 1853-1863.

Wheen had been in partnership with brother John from the 1830s, with a soap factory on Ratcliffe Highway, Finsbury. The factory had been founded in 1769 and was eventually owned by Joseph Moate. Moate was Richard Wheen's uncle and the boy married Moate's daughter (also his cousin) Anna-Maria, eventually siring 13 children. He encouraged his brother John Frith Wheen (1816-1903) to join the business. By 1837 they were manufacturing 645 tons of soap. In 1838 the figure had risen to 715 tons, worth then over £10,000. But, after a few years, they decided it was not profitable enough to support two families and they parted company. Richard moved to Creek Road, Deptford taking over a pin factory on the water's edge and once the Ravensbourne Wood Mill. He pioneered a number of techniques in soap manufacture, including the first use of soap coppers boiled by steam and not direct heat.

Before taking Colonnade House, Richard Wheen had lived at York Terrace, Regent's Park. The move was clearly necessary: Over the ten years the Wheens lived in Blackheath, the family grew and Richard and Maria Wheen were blessed with 11 children at Blackheath, and employed no less than 11 resident servants, including a butler, footman and coachman - the largest number in any house in the district. The Wheens moved in 1863 to Hayes Place, Keston, then to Lancaster Gate. Mr. & Mrs. Wheen finally retired to Courtlands, at Tunbridge Wells, where Richard died in November 1885. He left £50,000 as well as property and a prosperous business. Maria Wheen had died in 1881, aged 63. The business passed to the control of three of the sons; Richard (1838-1910), Francis (l850-1925), and Charles Wheen. It was floated as a public company in 1898 but remained with the Wheen descendants until competition from the big names led to an agreement with Lever Bros. and its closure.

by Paul Green
Posted by Michael Behm at 7:27 AM