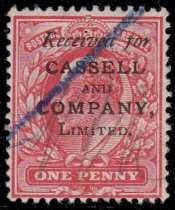 Cassell & Co. Ltd. is a publishing company, founded in 1848 by John Cassell and currently owned by the Orion Publishing Group.

In 1847 John Cassell established himself as a tea and coffee merchant in London, and soon after started a publishing business with the aim of supplying good literature to the working classes. The company's first publication was on 1st July 1848, a weekly newspaper called The Standard of Freedom, which advocated religious, political, and commercial freedom.

In 1851 Cassell rented part of a London inn called La Belle Sauvage and by 1852 he had expanded the premises and was printing magazines and books. The company prospered for just three years before going bankrupt. In 1855 the printing firm of Petter & Galpin took over Cassell's business. John Cassell rejoined the company as a junior partner after becoming solvent in 1858, the firm trading as Cassell, Petter & Galpin. Petter resigned in 1883 and in 1888 the company name was changed to Cassell & Co. Ltd. following Galpin's retirement and Petter's death. The company's publications during these years included: The Popular Educator (1852-55), The Technical Educator (1870-72), The Magazine of Art (1878-1903), Cassell's Magazine (from 1852), and numerous additions to standard works.

Cassell & Co. Ltd. continued as an independent company until 1998 when it was acquired by the Orion Publishing Group. 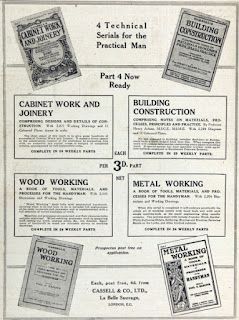 
by Mark Matlach
Posted by Michael Behm at 6:21 AM