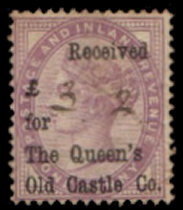 For well over a hundred years the Queen's Old Castle department store was one of the best-known shops in Cork, Republic of Ireland. The site of the store is one of the most historic and interesting sites in the city center. Confusingly, it was originally the site of the King's Castle, one of the two fortresses guarding the entrance to the medieval port of Cork. The original Queen's Castle was further to the north near present day Castle Street and Cornmarket Street. The King's Castle was built in 1206 and functioned until the late 15th century. Following an order from King James I in 1609, the castle was demolished and the County Courthouse was built in its place.

After the opening of a new City and County Courthouse on Great George's Street in 1835 the site of the old County Courthouse/ King's Castle was developed as a department store owned by a man named William Fitzgibbon. It is around this time that the site became known as the Queen's Old Castle, perhaps in honor of Queen Victoria, and the older name King's Castle came to be forgotten until modern historians drew attention to the fact that the original Queen's Castle was to the north of the department store.

From the 1840s to the 1970s. The Queen's Old Castle was one of the most popular department stores in Cork. The ownership of the store changed over the years. Brown Thomas Ltd. and Primark, trading under the name Penneys, were among the last owners of the premises while it was still a department store. Power Securities bought the store in 1978 and converted it into a shopping center consisting of 37 individual shops and restaurants. 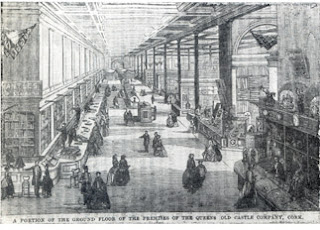 Interior view of the Queen's Old Castle department store in 1866


by Mark Matlach
Posted by Michael Behm at 7:34 AM