Kendal Milne & Co. was a department store in central Manchester which traces its origins to a draper's shop opened by John Watts in 1796. The shop catered for the elegantly dressed women of the era and proved so successful that by 1830 it had expanded into purpose-built premises across the road. In 1835, the business was sold to three young managers; Thomas Kendal, James Milne and Adam Faulkner. The store was re-opened as Kendal, Milne & Faulkner. When Faulkner died in 1862 it became Kendal Milne & Co. 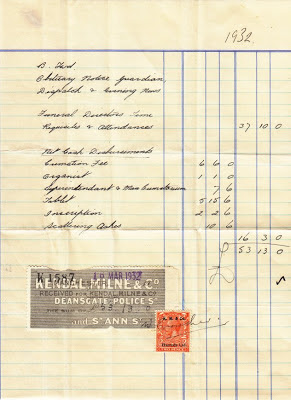 By the close of the 19th century Kendal Milne & Co. had grown into a department store offering a wide range of consumer goods. More than 900 staff were employed and extravagant tearooms, featuring oriental rugs, palms, and velvet-covered seats were the most fashionable venues in town. 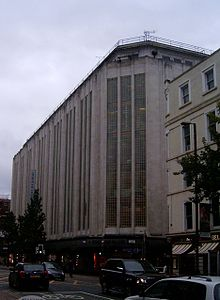 In 1919, the store was bought for £650,000 by Harrods who would maintain it until the 1959 sale to House of Fraser. Expansion continued during the 20th century to include a hairdressers, library, travel and estate agencies, a glass and china department, haberdashery, milliners and a furrier. In February 1939 the store was gutted by fire and a new purpose-built building was constructed at the end of the 1940s. The department store continued to trade as Kendal Milne & Co. until 2005, when it was renamed House of Fraser Manchester.

by Mark Matlach
Posted by Michael Behm at 11:01 AM