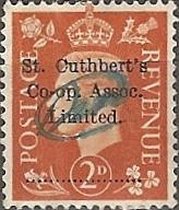 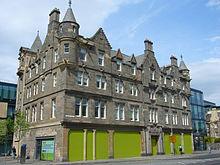 St Cuthbert's Co-op largest department store in Bread Street, Edinburgh was built in three stages to designs by three architects: John McLachlan in 1892; Thomas Purves Marwick in 1898 and 1914 and Thomas Waller Marwick in 1936. 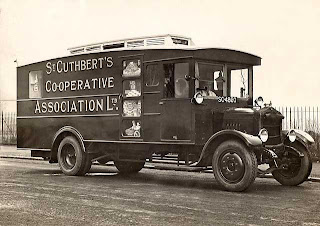 The 1930s section features a glass 'curtain wall', the first of its kind in Scotland, in contrast to the stone facades of its late 19th-/early 20th-century neighbors. The store closed in the early 1990s and buildings were converted for use as the Point Hotel and Conference Centre in 1999.

St Cuthberts expanded to become one of the largest societies in the British co-operative movement, employing some 3,000 at its peak, before amalgamating with the Dalziel Society of Motherwell in 1981 and being renamed Scotmid. Its dairy used horse drawn delivery floats until 1985, and between 1944 and 1959 employed the future actor Sean Connery as a milkman.

To this day, the Scotmid Supermarket opposite the Kings Theatre in Edinburgh still has, on the goods in access road, gates that read "SCCA" - St Cuthbert's Co-operative Association".

by Paul Green
Posted by Michael Behm at 6:46 AM