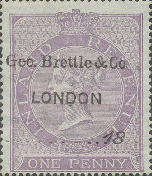 The firm of Ward Sharp and Company (established in 1801) had its origins in the hosiery business conducted at Belper, Derbyshire by the Ward family. It was formed by John Ward and James Sharp who also opened a warehouse in London where they could sell their products produced at Belper. Following financial problems, William Ward invited George Brettle (1778-1835) to join the partnership in 1803 and the firm was renamed Ward Brettle and Ward. Prosperity soon returned and by the end of the decade, the firm was employing 1,000 people. Its wholesale warehouse accommodation became insufficient and new premises were taken in Wood Street, City of London to supply London's drapers with cloth, hosiery, haberdashery and blankets. By the 1830s, it was one of the biggest hosiery firms in the country.

The death of William Ward in 1833 left the firm in the hands of Brettle alone and he named the firm, 'George Brettle and Co.' The Ward family, excluded from the business but still in possession of the premises at Belper, set up the firm of Ward Strutt and Sharp. George Brettle purchased a site nearby for his own warehouse in Belper. Brettle died in 1835, leaving the running of the firm to three friends until his three sons were of age to succeed to their partnerships from 1843. By 1872 all three sons were dead and, although steam power and mechanisation of production had been introduced, the firm had lost its dominant position to Wards of Belper. Problems with labour supply and the workforce, growing competition from the German hosiery industry, and costly family settlements restricted the growth of Brettles over the next thirty years.

From the 1870s, an increasing proportion of Brettles' output took the form of knitted underwear rather than stockings.

The commercial side of the firm underwent little change beyond the employment of travelling company salesmen and it was slow to respond to the demands of the new department stores. Following a succession of deaths and marriages, the Twyford family took control of the firm. In 1913, the firm was inherited by Lionel and Harry Twyford and a year later it became 'George Brettle and Co. Ltd'. Lionel died in 1920 but with Harry's skill and a boom in demand for hosiery and knitwear that began during the war, the firm was revitalised. The factory at Belper was extended, a new factory was set up at Wirksworth, Derbyshire to tap a growing labour force there, and the firm began building its own machinery.

The firm was organised into a number of departments including lisle, haberdashery, bandannas, manchester, outfitting, cotton, fancy knitted goods, gloves, cashmere, silk, and half-hose. By the late 1930s, the lisle department with its range of elastic ('Silkestia') stockings accounted for over half of the company's output. In 1936, Brettles had become a public company. For its employees, the firm set up a pension scheme in 1928, and built sports grounds in Wimbledon and Belper for the firm's sports teams, the Oberon Athletic Club.

Brettles growth declined in the general austerity following the war. This combined with the problem of finding a successor to Sir Harry Twyford led to a link with the Courtaulds textiles group for which Brettles became the main hose production in 1964. In 1974, the firm was bought outright by Courtaulds and became Courtaulds Hosiery Limited. By the 1970s, the factory at Belper produced only knitted stockings and tights. In 1997, Chilprufe bought Brettles from the Courtaulds Group and moved production to Leicester. Production returned to Belper in 2002 when Brettles was sold to lingerie manufacturer, Slenderella by Chilprufe's receivers.

By Paul Green
Posted by Michael Behm at 7:16 AM