W. J. Bush & Co Ltd. was a manufacturing chemist which was the first ever producer of flavourings and essences in Britain.

The company was established in 1851 by William John Bush. He acquired a small factory in Bishopsgate, London and undertook the preparation of herbs, spices, tinctures and essences. In 1885 W. J. Bush & Co. relocated to larger premises at Ash Grove, Hackney. The firm became a limited company in 1897. 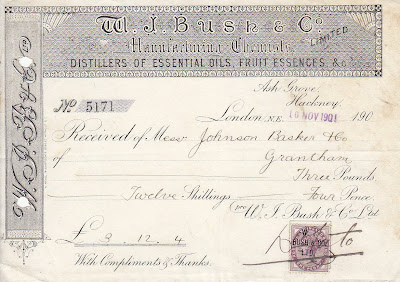 In the following years, W. J. Bush & Co Ltd. manufactured chloroform, aspirin, perfumes, flavourings, fruit bases and essential oils. The company developed a worldwide presence and also acted as a distributor or agent for other manufacturers in various countries. 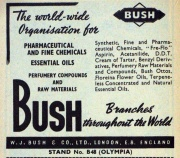 Advertisement 1949
In 1961 W. J. Bush & Co Ltd. was acquired by Albright & Wilson Ltd., a phosphorous manufacturer, but continued to trade under its own name.

In 1966 W. J. Bush & Co Ltd. merged with two other chemical manufacturers by the name of Stafford Allen & Sons Ltd. and A. Boake Roberts & Co Ltd., to form Bush Boake Allen Ltd., which became a subsidiary of Albright & Wison Ltd. 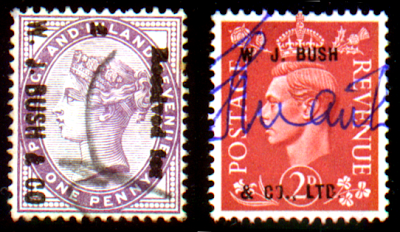 W. J. Bush used commercial overprints at least until the Second Word War, but the overprint is not common.

Bush Boake Allen Ltd. is also reported to have used commercial overprints, but I do not have a copy.
Posted by Michael Behm at 6:20 AM