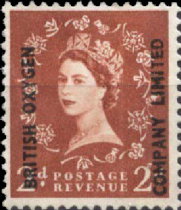 The BOC Group plc was the official name of the multinational industrial gas and British based company more commonly known as BOC, and now a part of The Linde Group. In September 2004, BOC had over 30,000 employees on six continents, with sales of over £4.6 billion. BOC was a constituent of the FTSE 100 Index and the FT 30. On 5 September 2006 The BOC Group became part of the Linde Group of Germany and is no longer traded as a separate company.

Brin's Oxygen Company, Ltd. was formed in 1886 by Arthur and Leon Brin. In the early days they manufactured oxygen using a high temperature barium oxide process developed from work by French scientist Jean Baptiste Boussin-Green. The main application for gaseous oxygen at this time was in connection with the limelight light sources used in magic lanterns and theatre lighting. A major new market emerged around 1903 with the development of the oxyacetylene welding process. Around the same time, new cryogenic air separation processes based on work by Carl von Linde and others replaced the barium oxide process, paving the way for larger scale and more efficient production. The company became the British Oxygen Company in 1906 and grew nationally and internationally through the following decades. In 1975 the company officially became BOC International Ltd, reflecting its success in developing business outside of Britain, and in products beyond oxygen.

In June 1999 following rumors of merger discussions between Praxair and BOC, Air Products and Chemicals Inc and L'Air Liquide S.A. made a series of cash offers to acquire BOC. On 13 July 1999 the BOC board approved a pre-conditional cash offer of £14.60 per share. Preconditions included obtaining regulatory approval in jurisdictions including the European Union and the USA. On 12 May 2000 the bid was allowed to lapse, following failure to reach a satisfactory agreement with the United States Federal Trade Commission. Following the collapse of the bid, BOC developed a new strategy to stimulate business growth in new products and markets, and to reshape its existing portfolio of businesses to improve Group performance.

In January 2006 the German industrial group Linde made a preliminary proposal to acquire BOC based on a £15 per share all-cash offer. This proposal was rejected by the BOC board of directors. In March 2006 Linde made a second proposal based on a £16 per share all-cash offer, valuing the company at £8.2bn (US$14.4bn; €12bn). This offer was recommended to shareholders by the BOC Board. This takeover was completed on 5 September 2006.