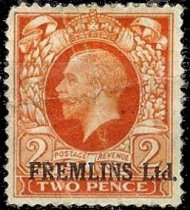 The Pale Ale Brewery in Earl Street, Maidstone, dominated the riverside until 1981, when the fermenting block--the remaining sizable building--was demolished. The brewhouse had been pulled down in 1976, 4 years after the cessation of brewing at Maidstone. Fremlins was the largest of the breweries in Kent; not only had it acquired several businesses in the County, but it had also cast its net further afield, taking over Adams' Brewery in Halstead, Essex in 1939 and Harris, Browne's Hadley Brewery at Barnet a year earlier.

Ralph Fremlin had established his brewery in 1861, when he acquired an almost derelict brewery from the executors of Mr John Heathorn. His beers were produced for the family trade only; he was a deeply religious man and his principles ruled out the purchase of public houses. To facilitate the sale of Fremlins ales and stouts, branch offices were opened in London and other towns in the South-east of England. 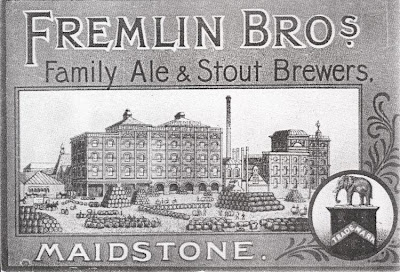 Ralph Fremlin was a pioneer in the supply of beers in bottles and gallon jars, and the brewery's range of products was remarkable. The Fremlins elephant lost its freedom in 1967, when Whitbread bought the business with its 800 or so licensed properties. At the time of the brewery's takeover, no less than nine bottled beers alone were produced.

by Paul Green
Posted by Michael Behm at 6:00 AM