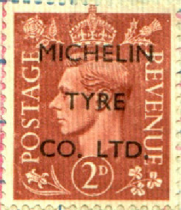 The Michelin Tyre Co. Ltd. was formed in 1888 by the Michelin brothers Édouard and André. Cycle tyres had been solid; they gave a hard ride and when they became unglued from the rim of the wheel they took a long time to repair. It was these two problems that the Michelin brothers set out to solve and by 1891 they had taken out a patent for the first detachable pneumatic tyre. 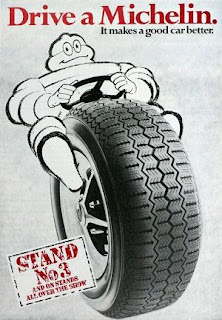 Bibendum arrived as the company's trade mark in 1898 after the brothers had seen a stack of different sized tyres that resembled the body of a man without arms. French cartoonist Marius Rossillon was approached, he had a design which had been rejected by a German brewery of a large figure holding a glass of beer who was quoting 'Nunc est bibendum' (Now is the time to drink). This design was re-worked into a large figure made of tyres, the quotation was kept, and Bibendum was born. He has since become one of the world's most recognised advertising figures having represented the company for over 100 years, and in over 150 countries.

Michelin had an arrangement with the North British Rubber Company to market a range of tyres in the United Kingdom as 'Clincher - Michelin Tyres'. In 1903 the Dunlop Pneumatic Tyre Company took exception to these tyres claiming an infringement of their own Patent which they had previously bought from the North British Rubber Company in 1897. History has shown though that the legal arguments of Dunlop were to be unsuccessful in their attempts to stop the progress of the Michelin Tyre C.o and their pneumatic tyre.

Michelin Tyre Co. Ltd. had offices situated at 45 - 50 Sussex Place, South Kensington, London SW but by 1909 designs for new headquarters had been drawn up and these were to be situated at 81 Fulham Road, Chelsea. The new building which was completed in 1911 was an 'architectural wonder' of its day outclassing a similar Michelin headquarters in Paris. The building was an advertisement in itself and remains to this day an iconic statement in its own right.

Michelin was at the forefront of tyre technology and gained valuable goodwill by supporting race events and endurance tests. The company took every opportunity of self promotion such as that to be found at the company's headquarters in the Fulham Road which were decorated with tiled panels showing the achievements of the company through all the forms of road and air transport.

The company promoted itself through a series of maps and guide books, and of course, through Bibendum. Bibendum has changed over the years he has become slimmer and has lost his cigar and glasses. The saying 'spare tyre' relating to a podgy tummy was derived from the Bibendum figure whose body was made up of tyres of different sizes. Bibendum had a slogan 'Nunc est bibendum' which translates to 'Now is the time for drinking' this was followed by 'C'est à dire: À votre santé. Le pneu Michelin boit l'obstacle' ~ 'that is to say, to your health - the Michelin tyre drinks up all obstacles.' The Michelin building in the Fulham Road has a large stained glass window depicting Bibendum drinking from a cocktail shaped glass with the slogan above him. The glass is not full of drink but of road hazards.

Amid much competition the company remains one of the top tyre companies in the world. In its continued involvement with race and endurance it has supported motorsport at virtually every level. Sadly though it last participated in Formula 1 in 2006 when Fernando Alonso won the 2006 Japanese Grand Prix on Michelin tyres.

by Paul Green
Posted by Michael Behm at 6:09 AM