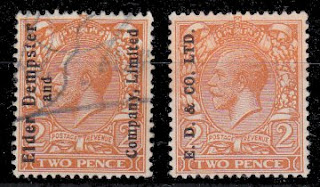 Elder Dempster & Co. Ltd. was one of the largest shipping companies in the UK, and during its 150 year history it operated more than 500 ships.

The company traces its origins to 1852, when the African Steam Ship Co. Ltd. was formed, with a contract to carry mail from London via Plymouth to Madeira, Tenerife, and the West Coast of Africa. In 1868, two shipping agents, John Dempster and Alexander Elder, established a company in Liverpool to act as agents for the British & African Steam Navigation Co. In 1887 Elder Dempster & Co. started to purchase its own ships, and by 1890 there were eleven vessels in its fleet. In 1891, Elder Dempster took control of the day-to-day operations of both the African Steam Ship Co. and the British & African Steam Navigation Co. In 1894 the Liverpool to Canada service was added. Elder Dempster & Co. became a limited company in 1910. 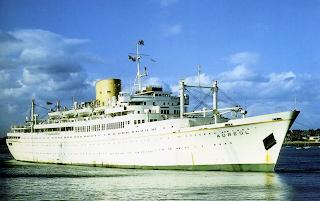 The Aureol
Elder Dempster & Co. Ltd. reached its heyday in the 1960s. As well as operating many cargo ships, the company operated three liners (the Aureol, the Accra, and the Apapa) on scheduled services from Liverpool to Ghana and Nigeria. Elder Dempster fell into decline in the 1970s. In 1974, the passenger service to West Africa was discontinued. In 1989 the company was acquired by Delmas-Vieljeux Group of France and passed into history. Elder Dempster was formally wound up on 8th May 2000.

by Mark Matlach
Posted by Michael Behm at 9:57 AM