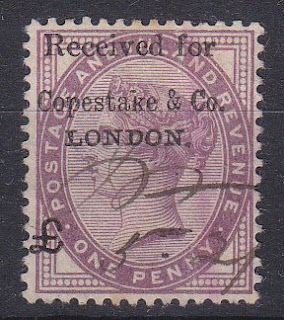 Copestake & Co. was a lace manufacturer and wholesaler established in London in 1825 by two young men named Groucock and Copestake. The original premises of the business was a small room over a trunk shop at 7 Cheapside. In 1830, George Moore was made a partner in the firm , which became Groucock, Copestake & Moore. As the popularity of lace goods increased, the company was able to grow and, in 1845, new headquarters were established at 5 Bow Churchyard. By now the company also had factories in Nottingham, Manchester, Glasgow, Paris and New York.

In addition to manufacturing various types and qualities of lace, the company made lace edgings and curtains as well as silk and cotton nets. The firm also marketed sewing and needlework accoutrements such as needlework cases. According to the 1865 Commercial Directory, Copestakes were also warehousemen for "lace and sewed muslins, crapes, gossamers, velvets, artificial flowers, millinery, baby linen, shawl and haberdashery, umbrellas and parasols." 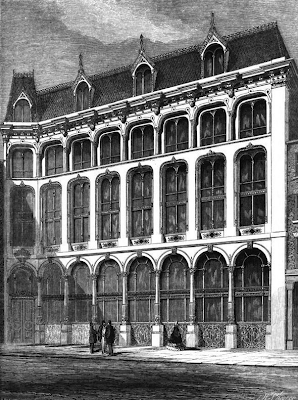 Copestake Warehouse at 5 Bow Churchyard
The original partners, Groucock and Copestake, died in 1853 and 1874 respectively. In 1877 the company became known as Copestake, Crampton & Hughes, and later it was called Copestake, Lindsay, Crampton & Co. 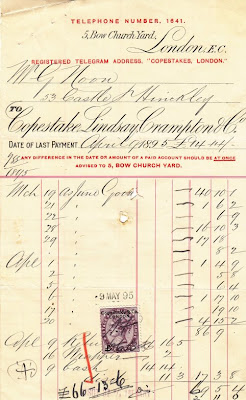 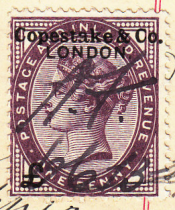 In 1868, Copestakes commissioned what may well be the first perfin on postage stamps. This is the very rare "S C". Copestakes was among the first companies to use security overprints, following the Customs & Inland Revenue Act 1881 that allowed for the overprinting of stamps used for fiscal purposes. I am not aware of any overprints used beyond the George V 1d Downey Head issue. 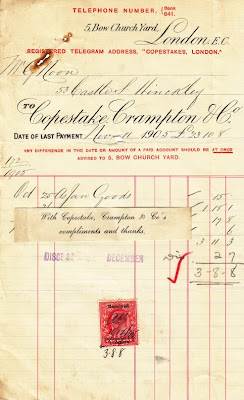 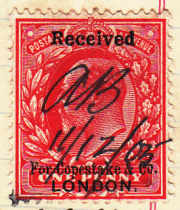 Copestakes stayed in the forefront of security endorsements as from about 1912 to 1950 the company used a POKO automatic stamp affixing machine that applied the perfin "CC / L" before affixing the stamp.

by Mark Matlach
Posted by Michael Behm at 9:39 AM